Up the Indonesian Punx!

Indonesian Policemen Forcibly Shave Off Punks' Mohawks To Promote 'Good Moral Values'
Aceh is a semi-autonomous region of Indonesia. Believing in far more conservative Muslim values than the rest of the Asian archipelago nation, they do things many wouldn't expect of Indonesia - like, say, forcibly shaving off punks' mohawks at rock gigs.

Keen to promote strict Islamic moral values, Aceh police "busted" a group of 100 or so punks at a concert near the province's capital, Banda Aceh, on Saturday.

In total, five women and 59 men, mostly teenagers, were driven to a police detention center in Aceh Besar where they shaved off their mohawks, removed their peircings and forced them to engage in "military-style discipline classes".

Religious teaching was also given to the 64 young punks over the course of the 10-day rehabilitation program - but it seems the compulsory shaving was what really bothered them:

"Why? Why my hair?!" said Fauzan, a twenty-year-old punk. "We didn't hurt anyone. This is how we've chosen to express ourselves. Why are they treating us like criminals?"

Local police chief Iskandar Hasan has his own side to the story:

"We're not torturing anyone," said Hasan. "We're not violating human rights. We're just trying to put them back on the right moral path.
Posted by GregGroovy at 10:13 AM No comments:

Posted by GregGroovy at 5:16 AM No comments:

Tierra Viva punks team up with Aztecs and work on creating a sustainability eco aware scene. Positive peace punk and cultural outreach that some might argue has been lost in the U.S. scene as the DIY ethic has been blurred and co-opted.

Posted by GregGroovy at 6:23 AM No comments:

This Is England 86 - BBC series 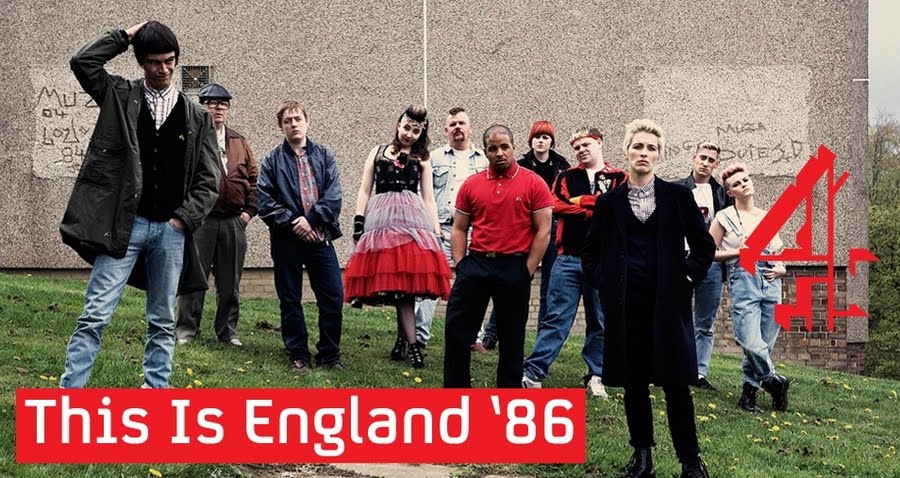 A 4 part mini series based upon the film This Is England has been created for the BBC. The show fasts forward 3 more years since the films original setting. Thus the exact time when I had my had drawn C-City Rockers t-shirt listening to Cut The Crap, My War and the first Suicidal Tendencies album. Ahh.. the joys of youth. Since it's unsure as to whether this will air in the states or be released for viewing, here are links for you to view the show.

Email ThisBlogThis!Share to TwitterShare to FacebookShare to Pinterest
Labels: bbc, this is england 86

Buy Nothing Day is around the corner.
Posted by GregGroovy at 6:32 AM No comments:

Email ThisBlogThis!Share to TwitterShare to FacebookShare to Pinterest
Labels: adbusters, buy nothing day

What is Thanksgiving without a lil William S. Burroughs:

Posted by GregGroovy at 5:54 AM No comments:

Very Awesome - Hempstead "chapter" of LIFNB take action with very impressive results. The below article is from NEWSDAY.

A spicy aroma of pumpkin filled the air in the Hempstead Long Island Rail Road parking lot Sunday, as volunteers from Long Island Food Not Bombs brought out boxes of homemade vegan entrees along with thousands of pounds of groceries to share with the men, women, and children who waited eagerly for the goods.

Hundreds of people clutched plastic shopping bags and waited patiently as about 100 volunteers from the group unloaded box after box of vegetables, bread, fruit, cereal and prepared items, and carried them to tables that lined Columbia Street.

"I'm just here to put some food in the cabinets," said Hatcher, who added that his food stamps often run out before the end of the month. "This is pretty much what I really needed."

Long Island Food Not Bombs co-founder Jon Stepanian said the group brought about 30,000 pounds of vegetarian food - edible, but unable to be sold by the grocery stores and food distributors that donated it - to the parking lot for its Thanksgiving Food Share Bonanza. They estimated about 800 people showed up during the day.

The group doesn't distribute turkeys or other meats, but organizers aimed to provide everything else that goes along with a traditional Thanksgiving feast. Stepanian said the groceries provided Sunday will keep people from having to choose between buying food and paying utility bills.

"We take a little bit of that pressure off," he said.

Long Island Food Not Bombs is part of an international movement that helps to distribute edible food that would otherwise be discarded because it is slightly damaged or is close to its expiration date for freshness. Stepanian said the group doesn't consider itself as giving away food, but sharing it.

"We don't believe in charity - we believe food is a right," he said.

Volunteer Jessica Feldman spent her day off from work Sunday helping to move the crowds of people along the different tables.

Feldman, an employee of Whole Foods - one of the grocers that provides food for Food Not Bombs - said she started to volunteer with the group after she became curious about what they did with the vegetables her employer donated to them.

"As soon as I went to one share, I was hooked," said Feldman, 23. "Once you see a child who needs food and you give food to them, it's a beautiful thing."

Angie Houseworth, 42, of Hempstead, said she waited at the railroad parking lot for hours before the food distribution began, and came away with her wheeled cart filled to the brim with fresh organic produce and even a bouquet of flowers.

Houseworth said both she and her husband are out of work, and she was grateful for the overflowing cart.

"We were all trying to get everything together for the holidays," she said. "It makes a big difference."
Posted by GregGroovy at 5:49 AM No comments: