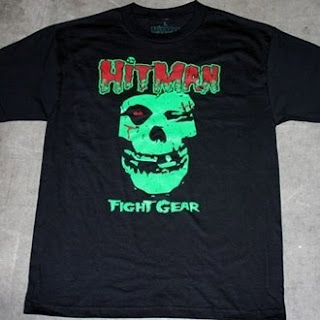 The folks at Hitman Fight Gear have come up with a funny variation of the Crimson Ghost skull made famous by the one time great punk MISFITS (I'm talking pre-Resurrection tour)Sorry I just can't get into the new versions of the band or the equally pathetic spin offs x-ward etc. Here's the serial inspiration:

If you're like me you might like the Crimson Ghost t-shirt without the taint stink logo of the Misfits printed on it. like the old day t-shirt. Those sadistic fucks at Rotten Cotton have one that will suit your needs.
http://www.rottencotton.com/shirts/horror/444_cghost.gif
Posted by GregGroovy at 8:55 AM No comments:

BEIJING (Reuters) – China is marking 20 years since the death of the second-most senior figure in Tibetan Buddhism by lauding him as an enemy of separatism in the restive region as it enters a year laden with tense anniversaries.

The death on January 28, 1989, of the 10th Panchen Lama, revered by Tibetans for championing their rights, deprived Chinese authorities of a buffer against discontent in the mountain region and helped stir demonstrations and riots in the regional capital Lhasa weeks later.

But Chinese officials now champion the late Panchen Lama as a model patriot, set against the exiled Dalai Lama, who they condemn as a separatist traitor.

In the official People's Daily on Tuesday, a senior Communist Party official again lauded him as an example for restive Tibet, which erupted in riots and protest in March last year.

"We must learn from and continue his patriotic spirit," wrote Du Qinglin, chief of the Party's United Front Department, which deals with religious and ethnic groups.

"He was always at the forefront of the struggle against separatism and resolutely protected ethnic unity."

But the 10th Panchen Lama's political legacy is much more disputed than such propaganda presents. A leading expert on Tibet said Beijing has trapped itself by failing to accept a successor Panchen Lama who is trusted by most Tibetans.

China lost a chance to win greater acceptance from Tibetans when it put under secretive house arrest the five-year-old boy chosen by the Dalai Lama as the reincarnation of the 10th Panchen Lama in 1995. Beijing installed its own successor, who is spurned by most Tibetans as an illegitimate choice.

"China's leaders are locking themselves into a very tight corner -- it can't rule Tibetans without the mediation of a leader whom Tibetans trust and respect, but it denounces the Dalai Lama as a monster," said Robbie Barnett, a Tibetologist at Columbia University in New York.

"The Panchen Lama has become increasingly important as a symbolic figure since his death because Beijing's policies increasingly seem focused on undoing everything he struggled for," Barnett said.

China is seeking to prevent unrest in Tibet as it marks the 50th anniversary of the Dalai Lama's flight into exile in March. Most Tibetans still honor him as their supreme religious leader.

A security lockdown has been imposed in most Tibetan areas. And authorities in Lhasa launched a "strike hard" campaign to stifle potential trouble there, overseas groups advocating Tibetan independence said, citing media reports in the city.

The Lhasa Evening News reported on Friday that police hunting criminals carried out "comprehensive checks" on 5,766 residents, the International Campaign for Tibet said in an email.

"This latest strike hard campaign appears to be intended to intimidate Tibetans" ahead of their traditional new year in late February and the 50th anniversary of the Dalai Lama's flight, said Kate Saunders of the International Campaign.

The Lhasa newspaper said 66 people were detained on suspicion of theft, burglary, prostitution and "having reactionary opinions" -- views critical of Chinese rule.

Tibet was relatively stable for the decade until the 10th Panchen Lama's death, as the Communist Party eased the harsh attacks on Tibetan Buddhism of Mao's time and experimented with removing Han Chinese officials from many posts in the region.

China has since poured billions of dollars to modernize Tibet but the dispute over the Panchen Lama's position has left a void that could presage the kind of conflict that could erupt after the death of the current Dalai Lama, now 73 years old.


After the Dalai Lama fled, the 10th Panchen Lama stayed on and was initially seen as a collaborator, but it later emerged that he spent over a decade either in prison or under house arrest for criticizing Beijing. He was freed in 1977 and politically rehabilitated the following year.

Asked to comment on the 10th Panchen Lama's legacy, his only child, Yabshi Pan Rinzinwangmo, now studying in Beijing, told Reuters: "My father never wavered in his convictions to do everything possible to broadly support Tibetan culture and Tibetans everywhere."

(Editing and additional reporting by Chris Buckley; Editing by Valerie Lee)
Posted by GregGroovy at 8:49 AM No comments:

here's the Yahoo AP wire
China keeping up with the same ol' same ol' and trying to eradicate TIBET from the memory banks using oppression and revisionism. It's hard to expect respect from a rule that beats down it's own people for thinking outside of the communist think tank. It's such a good system, if you're the domineering top and have US corporate whores loading your pockets $$$ and getting some free suck suck on the side. If you're not on the take.. you play goodie good and don't say anything. Not to anyone's surprise you wont be able to read this in any of the booming internet cafes in Beijing.
Posted by GregGroovy at 8:40 AM No comments: