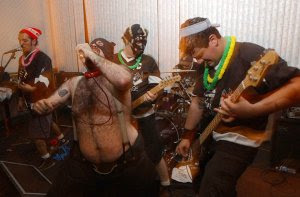 Hey folks. TWO MAN ADVANTAGE posted some tour dates on punknews.org.
So get out there and see the band.

Here is an interview that I did with the band a few years ago prior to their South Of Canada release. Available now from Rodent Popsicle.

For those of you who like to look at moving pictures here's a clip:

Posted by GregGroovy at 8:24 AM No comments: 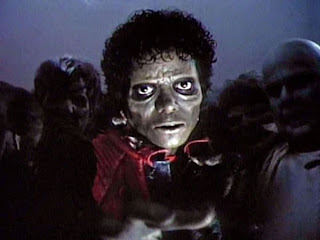 While people try to make sense of the bizarre liberties that stardom granted Michael Jackson, I'm trying to come to some sort of rationalization as to why I found the guy's music intriguing for a few years in elementary school. I blame this all on John Landis. Had he not made that Thriller video, Jackson would be like SAGA to me: a band that I would reference and maybe two people would remember...or maybe like the 200,000 people on you tube.
Landis directed a horror flick called An American Werewolf in London which was groundbreaking, funny and gory. Rick Baker did some awesome make up that helped the f/x industry evolve a hundred fold. Watch other werewolf flicks like Wolfen and Cat People and you'll see what I mean. (No disrespect to f/x'ers Carl Fullerton and Tom Burman.) I loved American Werewolf. There's a transformation sequence (in case you never seen the Thriller video) that apes it's human to werewolf scenes.
Thriller also pays homage to George A. Romero. I recall seeing the trailer for Dawn Of The Dead and being spooked by it. (Like I said, I was in elementary school.) When Dawn came out on VHS it was an event. Another great film filled with gore and dark humor. (A formula that was somewhat captured in the James Gunn remake- but we can discuss that at a later date.)
I had fondness for the horror genre and a genuine love for Universal Monsters, Godzilla and Bloodsucking Freaks (a lil film that pissed off me mom when pops rented it). So given that those genres were successful, it would've been impossible for Thriller to be a failure. I thought music/horror/tv hadn't gone this well together since the time Alice Cooper was on The Muppet Show.
The trap was baited and from grades 3-6 I was buying pop garbage like the rest of the trash heap. Thriller WAS cool. Fortunately I had older siblings who listened to music and played guitar so that we weren't like most suckers bouncing from Michael sound-a-likes to pop lockin' look a likes. Van Halen 1984 helped steer things in the right direction. Not to mention the Ramones, Cheap Trick, The Cars and other radio rock that kept me on the holy road to rock salvation.
I get frustrated that people are so down that Michael is dead. Let's not forget he was fucking brilliant as a zombie. Let Thriller be that foreshadowing moment. I long await his decomposed mass to return. Romero suggested, "When there's no more room in hell, the dead will walk the earth." Michael will come back pop lock and moonwalk, maggots, worms and all. I can't wait. Rise Zombie Michael Rise!!!
Posted by GregGroovy at 5:10 AM No comments: 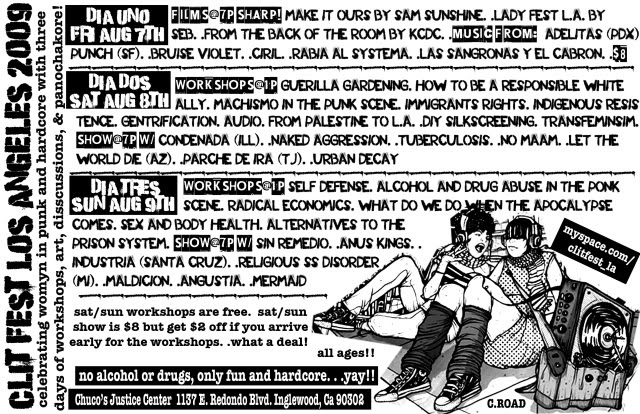 Here's the line up flyer.A nifty DIY punk affair.
www.myspace.com/clitfest_la
Posted by GregGroovy at 4:44 AM No comments: