This is the latest tee that I designed with Spreadshirt.com
Posted by GregGroovy at 7:00 PM No comments:

Bomb Drops
Posted by GregGroovy at 3:55 PM No comments:

We've been dabbling with the shirt/print house ZAZZLE as well as SPREADSHIRT. The idea is to see which places generate any sort of sales as well as which ones ban any of our images and deem any of our stuff as inappropriate. Childish I know. I make minimal commissions from these sales, which in the DIY scheme of things is probably deemed as asinine and retarded because I could be making more $$$. right now i don't have the dough to put any upfront costs on something that might be a gamble, so this is how I'm going to play around with things. I like zazzle because their buttons are pretty simple to make though a bit pricey. spreadshirt has cheap tees and a multitude of materials.
Posted by GregGroovy at 3:24 PM No comments:

Now that the shit is about to hit the fan. Jeffrey Conroy 19 accuses his plea bargaining pal Chris Overton of stabbing Marcelo Lucero to death. Which is a smart move since this isn't the first time that Mr. Overton has found himself involved in a crime scene where a dead body is the outcome. Here is a piece that I had started writing when this gang were first picked up by the cops, before the lawyers were hired and before all the tough guys started to roll on one another once the possibility of taking it in the pooper prison style was becoming more and more an imminent reality.
original post
Here's some Ap excerpts that are interesting:
March 23, 2010
RIVERHEAD, N.Y. - (AP) — Witnesses say a New York teenager accused of murder in the hate crime stabbing of an Ecuadorean immigrant had tattoos depicting a swastika and "white power."

--The defendant, Jeffrey Conroy, was watching the HBO prison drama "Oz" in April 2008 when he decided it would be cool to get tattoos, said Keith Brunjes, who described himself as Conroy's best friend. Over the course of several weeks, Brunjes applied a star tattoo to one of Conroy's arms, a lightning bolt on the other arm and the swastika on the outside of his upper right thigh.presented "white power."

Brunjes said when he tattooed Conroy with the lightning bolt he didn't know what it signified.

He said Conroy was like a brother to him. "He was always the kid I went to with anything," he said.

Outside court, Conroy's attorney William Keahon brushed off questions about the tattoos, saying: "It was two young kids, 16 and 17, that were acting like jerks."

Jerks is greatly understated. No idea what it signified, really Keith? Lemme guess D- in history, give or take a .5? I guess the remedial room think tank has become more and more acceptable in the area. Shitheads are dismissed as politically incorrect patriots, and the dipshit revisionists are the new fact spitters.

You can't blame PMHS. Teachers can't teach anything beyond the run of the mill status quo curriculum leading to the less than critically thinkin' fuktard characters that are making up this soon to be made for tv docudrama. 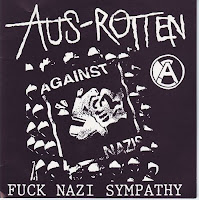 Posted by GregGroovy at 3:16 PM No comments:

STORY HERE Love 'em or hate 'em fact is Malcom Mclaren helped launch punk to a wider audience which lead to a bunch of other people starting bands, some good, some bad.. but that aspect isn't/wasn't the point now is/was it?
Posted by GregGroovy at 2:54 PM No comments:

"The truth aint nothing but the truth" - Henry Rollins WARTIME
Posted by GregGroovy at 2:48 PM No comments: