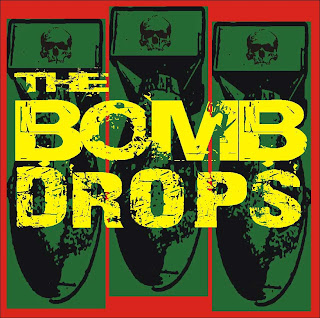 HISTORY IS CONSTANTLY BEING REWRITTEN

THE BOMBDROPS: analog, digital, virtual and mist manipulating motherfuckers. Power chords, tape splices, percussion, machinery. Bootlegged software, cassette multi tracks combined in cut, pasted, puked onto the floor fashion and mopped into a neat little catastrophe.
The band consists of conspirators from Strong Island. The participants and settings are almost irrelevant; those formulas that emphasize that sort of thing are usually well penned pr sheets that are trying to sell you some commerce along with some mythology. The context of time is arguably more important and the next following sentences are the ones to remember out of this slop, if you choose to digest any of this garbage at all.
Their revolution began as an offshoot project in the middle of the 90s during the Clinton administration. Organized at some vitamin factory by line workers from the south and north (who met while mindlessly packing whatever goods passed by on a conveyer belt.) The spark ignited a flame and some songs are structured and recorded in a rehearsal space/squat which later these sorry bastards were evicted from. Since, welp… you can’t sleep and wash in a rehearsal space. It destroys the value of a poorly kept, highly vandalized industrial park. After all what would the goons across the way think when they’re dropping engines and see some unsavory characters scraping crumbs to exist too?
Fast forward to the Bush administration very little has changed, new names, old beefs, and fancy spin doctors with new war strategies. Very little has improved with the above mentioned bastards, locale, no $$$ and yet more of their peers are smiling widely and itching to hock new products for some bomb maker or some other multi faceted chemical food production corporation and its share holders.
Utilizing military defense communications like the internet, and media tyrannical empires to help promote their own devices THE BOMBDROPS are posting the manipulations and distortions as a means of encouraging others to hop aboard this doomed train and to help spread a few moments of chaotic sanity.
Lead singer Bhopal states, "Let’s make the make the most of the precious seconds we have before total annihilation. We all know where we’re headed, let’s stop the avoidance tactics and do something before we hit the restaurant at the end of the universe."
The Bomb Drops Myspace page
Posted by GregGroovy at 5:41 PM 1 comment:


Through out the Bush clusterfuck most of our poop punk yutzes that were ragin' against the machine a few months earlier sat rather quiet as to not disturb Mom's marketshare. One artist that has been exceptionally outspoken against the Bush administration and corporate political bullshit has been Jello Biafara. That's why I find it exciting that he has new group, new cd due out and has been making appearances with The Guantanamo School Of Medicine.
check out the band in the usual places - Myspace, Facebook and at the always wonderful ALTERNATIVE TENTACLES.
Posted by GregGroovy at 7:03 AM No comments: